What is a Moissanite?

Moissanite is composed of silicon carbide and is a rare mineral that originates from space meteorites. Moissanites were first discovered by chemist Dr. Henri Moissan at the site of a massive meteorite strike in Arizona, USA. This new stone was named 'Moissanite' in his honor as Dr. Moissan spent the rest of his life attempting to recreate this rare mineral in his laboratory.

It wasn't until the late '80s where scientists developed the innovative thermal growing process that made Moissanites more widely available to consumers.

Is Moissanite a type of diamond or a simulated diamond?

Moissanites are not a Diamond or substitute of a Diamond, either scientifically, chemically, or emotionally. Moissanite is not a fake Diamond but rather a different type of clear gemstone (just like White Sapphires) with its own set of chemical and optical properties.

Will the brilliance of Moissanite fade over time?

Each Moissanite is included with a Limited Lifetime Warranty which guarantees that every Moissanite gemstone will maintain its brilliance and fire forever.

What is the color grade of a Moissanite?

We only source Moissanite stones graded as D-E-F and they are completely colorless and perfect if you want an ice-white stone with maximum brilliance.

What is the clarity grade of a Moissanite?

Since moissanite is essentially all lab-created using natural elements, we are able to control the entire process and ensure the highest quality gemstone with the greatest care in regards to moissanite clarity. As a result, we only source Moissanite stones graded as VVS2 clarity grade, which means it is absolutely clear to the naked eye of any inclusions or blemishes

What is the cut grade of a Moissanite?

We only source Moissanites which are professionally and precisely faceted and cut according to the exact angles and ideal proportions to maximize their brilliance and enhance their incredible fire.

Can a Moissanite scratch?

A Moissanite is durable, tough, and extremely resistant to scratching. With a hardness of 9.25, moissanite is harder than all other gemstones except diamond. Each Moissanite is backed by a Limited Lifetime Warranty that protects against damages to the stone. 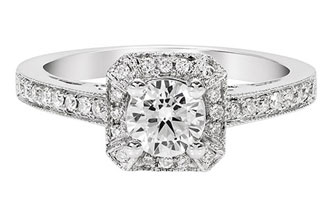 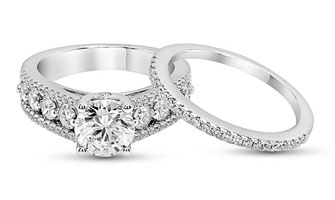 Get Approved with credit

Get Approved with bad credit or no credit

Checking your eligibility will not affect your credit score

Get Approved with credit

Get Approved with bad credit or no credit

Checking your eligibility will not affect your credit score